This article is a stub. You can help Altered Beast Wiki by expanding it.

Altered Beast (獣王記 Jūōki, literally "Beast King's Chronicle", in Japan) is a beat 'em up game developed and manufactured by Sega. This is the Sega Genesis/Sega Mega Drive port of Altered Beast, which was a pack-in game with the console before being replaced by Sonic the Hedgehog.

It is the time of gods and myths and legends. When men were warriors and courageously fought unnatural enemies in the endless battle of good against evil. It is the time of the Altered Beast.

Summoned by Zeus, God of Thunder, you have been awakened from the dead to challenge the wicked Neff, God of the Underworld, for the fate of Athena. And Athena is no ordinary girl. She is the daughter of Zeus and must take her rightful place among the gods if only you can free her from place of imprisonment.

Although you were once a brave and awesome Roman Centurion, the rigors of this journey demand a supernatural display of strength. And so you are bestowed with the powers of the Altered Beast. The power to transform your being into a part animal, part human creature of formidable force.

But to achieve this rare form of vitality you must earn it. By conquering foes and capturing spirit balls, you'll muster the energy to transmute from one beast to another. And each time you do, you'll advance one round closer to the realm of the underworld where Neff awaits the final confrontation.

With five complete rounds to clear, the number of underlings you must defeat is staggering. But Neff promises to be the most loathsome enemy yet, so prepare yourself for the worst. And remember, Zeus didn't bring you back from the grave to fail!

Awaken, asleep ancient beast warriors!
Appear again to me, and follow me, to help my daughter!

When the heavens and the earth were still chaotic, there was a species of beast men. Their bodies have the power to actively convert spiritual power, and when it reaches the limit, they gain the ability to transform into beast warriors. Having human intelligence, the power of a beast, and a spiritual power comparable to that of the gods, they overwhelmed nature and other species, gaining control over the earth. When they had no enemies left on earth, they gradually began wishing to become gods, and made others worship themselves as gods. However, the gods who knew of this were very angry, and Zeus, leader of the gods, confined the beast men and their power within stone monuments.

Over a thousand years have passed since the confinement of the beast men. After a long period of peace, the gods forgot the battle and became negligent. One day, the underground world was invaded by unidentified monsters. Hades, the god who governs the underworld and the Yomi, tried to fight back, but the monsters appeared without end and repelled his soldiers. Hades went above ground to seek help from Zeus, the leader of the gods. Upon request from his daughter, Athena, the goddess of justice and wisdom, Zeus sent a support legion commanded by her. Athena's army was strong, and after advancing through the underworld for 10 days, the battle was clearly progressing in favor to Athena and her army. But at the bottom of the underground, a new scheme was being set in motion.

At the bottom of the Yomi, a majin said:
"Capture Athena. Using Athena as a shield, I will kick the gods out of the world."
Hearing the majin, the underground monsters started moving. Athena was overlooking the state of the battle, being alone in a place with a good view. Foreseeing the victory, she tried to join the front line, but a black arm suddenly wrapped around her neck. Then another black arm blocked her mouth. She struggled and swung her arms, but the black arm applied some kind of drug on her, and her consciousness gradually faded.

"Athena was kidnapped by the enemy." When Zeus heard the news, he tried to attack the underground with the whole army to help Athena. When Zeus was about to give orders to the army, a black pigeon came in. When the pigeon descended in front of the god, a voice suddenly came out of nowhere:
"Gods, if you interfere any longer, I won't guarantee what we will do with Athena's body. Athena's limbs are so beautiful, but also so meager, that they may disappear like a mist..."
The voice gradually became a laugh, and at the same time that the laughter disappeared, the pigeon became a black mist, disappearing in front of the god...

Zeus canceled the mobilization of all troops, and discussed what to do with the other gods.
"At this rate, Greece, and also Athena... If at least there was someone in the underground world that could rescue Athena..."
"That's it! Why don't you revive them? The most ferocious and brave race in the world."
"The beast men!"
"Exactly, they surely are capable of rescuing Athena from the underworld."
"But it's already been over a thousand years since they were trapped there. They may not be as powerful as they were in the past."
"It is a bet. Plus, if they can't do it, no one else can."
"Alright then, let's bet on them. Our future... and Athena's fate..."

A stone monument was near Zeus' temple at the foot of Olympus. For a moment, the sky was covered with dark clouds and a lightning appeared. The lightning smashed the stone monument, and a man emerged from its remains.

The wind carried the voice of the god to the ears of the revived man. The the wind passed, there was a battlefield in front of him. A battle was about to start... 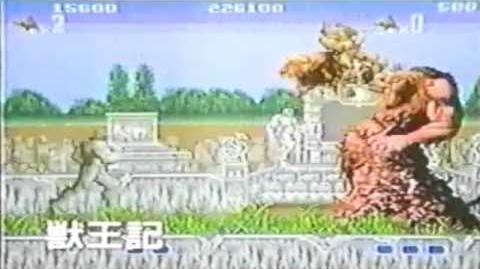 メガドライブ スーパーサンダーブレード・スペースハリアーⅡ・獣王記 CM
Japanese commercial
Add a photo to this gallery
Retrieved from "https://alteredbeast.fandom.com/wiki/Altered_Beast_(Sega_Genesis)?oldid=4916"
Community content is available under CC-BY-SA unless otherwise noted.