The Bear returns in the game as Grizzly. He can be unlocked after completing the Elevator of Doom.

A Chicken Stinger turned into a Fossil by the Bear's breath 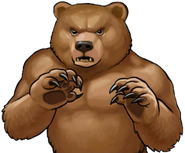 Bear as it appears in SEGA Heroes
Add a photo to this gallery
Retrieved from "https://alteredbeast.fandom.com/wiki/Bear?oldid=5044"
Community content is available under CC-BY-SA unless otherwise noted.