The Dragon, or Weredragon (ウェアドラゴン), is one of the transformations from the Centurions that allows them to fly, shoot lightning bolts, and surround itself with blasts of electricity. In the original game it appears in the second stage.

This version is considered in story to be the Ultimate Genome chip. 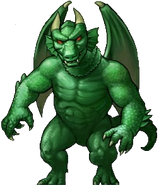 Retrieved from "https://alteredbeast.fandom.com/wiki/Dragon?oldid=5042"
Community content is available under CC-BY-SA unless otherwise noted.