The Wolf, also known as Werewolf (ウェアウルフ), is one of the forms available for Centurions to transform into. In the original game it is present on the first stage. It is also in the game's cover, and thus is the form people are most familiar with.

Following the tradition of the series, it is the first transformation you get in the game. Being more

Abilities: Unlike the original, the Wolf has the element of light imbued in its claws that give its attacks increased power.

The Wolf form of the Centurion makes a cameo appearance in Wreck-It Ralph as a carictured picture in Tapper's bar.

The Wolf for, also appears as a playable character in the mobile game, SEGA Heroes. 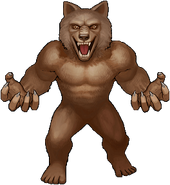 The Wolf as it appears in SEGA Heroes.
Add a photo to this gallery

Retrieved from "https://alteredbeast.fandom.com/wiki/Wolf?oldid=5071"
Community content is available under CC-BY-SA unless otherwise noted.